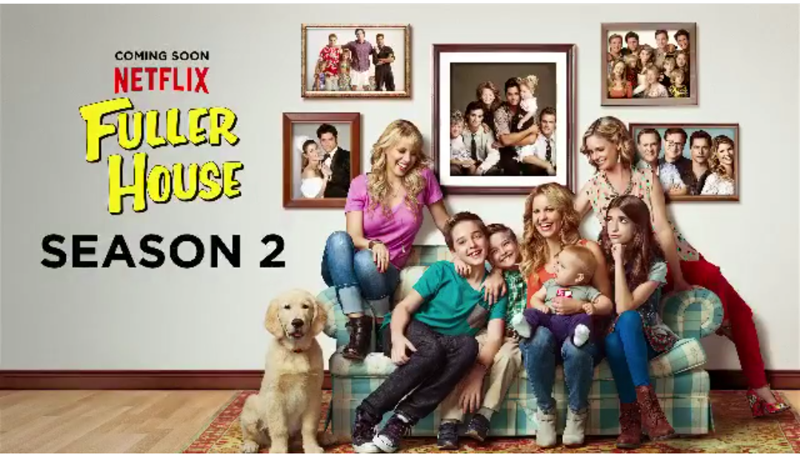 Fuller House is a new series based off the show Full House. The first episode featured every major character from the original show except for Michelle, the youngest daughter of the Tanners. The new series centers around grown-up D.J. Tanner (now known as D.J. Fuller) and her life as a single mother of three boys after the death of her husband. The main characters are DJ Tanner-Fuller, Stephanie Tanner (Jodie Sweetin), Kimmy Gibbler (Andrea Barber), Jackson Fuller (Michael Campion), Max Fuller (Elias Harger), Ramona Gibbler (Soni Bringas), and Tommy Fuller Jr. (Dashiell and Fox Messitt).

In the first episode, they all come back to the house which is the same exact set from Full House. Supposedly Danny, the father, was going to sell the house. But then he had watched how much DJ runs around and constantly is stressed and lets her have the house. At the end of the episode when everyone was about to leave Stephanie and Kimmy along with her daughter Ramona decided to stay and live with D.J. to help her out.

In Fuller House DJ is a veterinarian, Stephanie is a musician/DJ and Kimmy is a party planner. Stephanie and Kimmy are trying to get DJ back out there to dating and it worked somewhat. DJ’s bosses son whose name is Matt had taken over and they soon started liking each other. But who remembers Steve? DJ’s first love from high school still trying to get back with her to this day and she started liking him again also. DJ had caught herself in a love triangle.

I enjoyed Fuller House very much. It carries over some of the same elements as Full House. For example it had the same theme song Full House did just sang from a different person. It had the same humor from Full House when I was watching season one I was always catching myself laughing. My favorite character is Max Fuller the middle child of all 3 of DJ’s boys. He’s my favorite character because he has a great sense of humor. Some similarities Fuller House has to Full house is that DJ had gotten a golden retriever for the family and it was one of Comet Jr.’s puppies. Comet was the golden retriever in Full House. The name of the dog they have now is Cosmo. Also if you remember Michele and who played her parts, they were the Olsen twins and Tommy Fuller is played by twins also.

There will be a season two coming soon to Netflix for all you guys who are interested in knowing. If you haven’t seen Fuller House, it is on Netflix right now. If you are interested in family comedy, I recommend it!