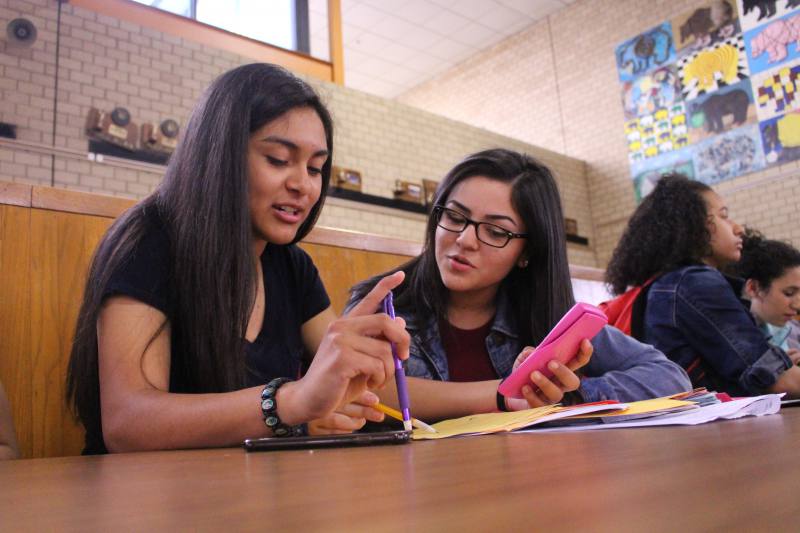 AVID students Irene Delarosa and Fabiola Delatorre work on homework together during lunch. AVID is one of many programs at risk of being cut due to budget constraints.

Education opens eyes, frees minds, and provides voices for children who otherwise wouldn’t be heard. Some students in the Wichita area have discovered passions that have kept them out of trouble, or passions that will translate into future careers. Others are able to eat daily only because of free meals at school. The USD 259 school system has provided a “way out” for many members of the diverse community it serves.

Now the Kansas legislature is attempting to balance their failed budget on the backs of those who make this system possible. Thanks to the new block grant funding system they’ve implemented, the district can expect up to $30 million in additional costs with $0 in additional funding for the 2017 fiscal year.

The district will receive flat funding because of Gov. Sam Brownback’s historical income tax cuts: individuals in the top income tax bracket have seen their rates drop by 25% and 191,000 business owners have been exempt from paying income taxes altogether. Since, Kansas has been trailing the region and the nation in nearly every measure of the economy. For example, the state’s job growth rate ranks ninth worst in the nation.

Consequently, large budget shortfalls exist. And the Board of Education is left scrambling to complete the seemingly impossible task of cutting $30 million from their budget.

The indisputable truth is that the state government has failed to do its job by saddling Kansas schools with budgets that are unconstitutionally inequitable. The burden of bridging funding gaps falls not on the shoulders of the elected officials who created it, but instead on those of our educators. Educators who equip us with arguably the most powerful tool we will ever receive.

No matter what changes are put in place, we are going to suffer as a result. How will students get to school if their bus route is cancelled and they don’t have a parent at home who can take them? How will first generation college students navigate the application process without the guidance of a college career coordinator? What will diabetic students do if there isn’t a nurse to administer the medication they need?

Superintendents and principals, who care deeply about our success, are being cornered into making decisions that contradict everything they stand for. As long as Brownback’s income tax cuts are in place, the revenue simply won’t exist to help the education budget recover.

Meanwhile, students in Kansas will fall farther and farther behind the rest of the nation.

The changes that are going to occur are out of our control. In our control, though, is our attitudes. Yes, some days are harder to face at school than others, but don’t take for granted the resources you’ve been afforded.Take your education seriously, it will pave the way to a prosperous future.  And if our governor has decided that we aren’t worth investing in, let’s prove him wrong.