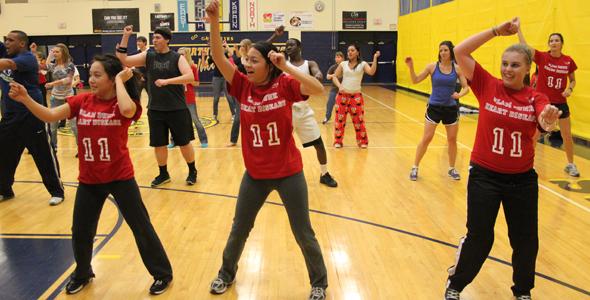 Over the span of this school year, a few Distributive Education Clubs of America (DECA) members have been working very hard on a little project they call Hoops for Hearts. Despite some snow day postponements, the organizers still managed to raise $1,700 for the American Heart Association.

“It’s a DECA project that Uyen Tran, Julia Doan and I have been working on and all of the money we’ve helped raise goes straight to the American Heart Association,” junior DECA member Victoria Devereaux said.

They started out by selling paper hearts for a dollar each, from which they made a collage. Eventually they sold T-shirts, had a balloon release and even hosted a dance class for a Latin American dance called Zumba.

“In the end we raised $1,700 and we’re taking the written event to State,” Devereaux said. “If we win State, we’ll be going to Nationals in Orlando Florida.”

At the winter homecoming game, basketball players donned red shoe laces and during the halftime show, elementary school kids came in for some jump roping. Also, the game winning ball was delivered by junior Chelsea Smith, who has dealt with heart problems of her own, and a check was presented by Mel Hamilton Ford for $500.